The solos were different from those of yesterday, the concert was great thanks to that and to a little, tiny thing at the end...
I was in Stand A at the right of the main scene and I had noone in front of me. The view was different because then I could see them on the main scene.

Happy Birthday - I could see them on the top of the diamond, I love this song it's a very entertaining one, I dance every time I hear it aha
Weeeek
Gan gan ganbatte - A junior was in front of me while dancing but again I have understood nothing about the choreography.
Why - I could see them clearer than yesterday, I've seen Koyama touching his hair while he was singing, it was pretty sexy, thank you again K-chan.
Bambina - PLEASE SOMEONE PUT WATER ON KOYAMA HE'S ON FIRE XD ! I couldn't help but watching him and Tegoshi with my binoculars like the day before, the moves are great. Koyama could have sing the song "Hips don't lie" with Shakira, really !
Say Hello - Yamapi failed... He has dropped away his chair so he couldn't sit on it, he has stood up while doing his solo and Koyama has raised his chair from behind.
Party Time
Tambourine - Shige, Shige, Shige... Like yesterday he has thrown away his mic but this time it has fallen from the diamond so some girls (and me) have said "aaaah" as if to ask how can he sing without his mic, what will he do ? So when it was time for him to sing again he has jumped from the diamond (it was high) and a junior has given it to him.
What an idiot, yesterday he could see that if he was to let go of the mic it would drop but no today he did it again !
Kesenai - YES ! The new Tegoshi's solo ! When I have heard the music I have screamed, and he has sung it well as expected. He was at the center stage with another suit than for "Ai no matador".
Masuperman - This time I've seen it well, the dance is good but again the end makes me think of Dr Jekyll.
I.za.na.i.zu.ki - KYAAAAAAAAAAAAAA Tegoshi was right in front of me, he did "Itte Q" and "Ima wa"', he was funny I didn't think he could be funny ! When he saw that some girls were asking him to do this and that he did it, like this girl who had the character "ima wa" on her uchiwa, that's why he did it, and he was waving at us all the time. After he did the moonwalk with his fingers XDDDDDDD
Taiyou no namida
Hoshi wo mezashite
Easy come easy go - I think they were waving at us during that song.

MC - A very funny MC, Yamapi pointed at a girl in bloc B in front of the main scene because she had a very special uchiwa : it was written "Pi" with diamond as you all know ! And behind there was the character doing "ima wa" sign lol Yamapi has taken it from her and has shown it to us, it was very heavy and beautiful ! There were 2 groups of girls calling out Massu's name on my both sides. Like the day before I could hear more of Massu than of the other 5 members.
They said that Shige had blown a lot of kisses so he has shown to the camera how he had done it, weird kiss but of course everybody has screamed. And after this during all the concert he has done it, he has blown kisses after kisses so Koyama has laughed each time he was next to him.
They have asked the men, who were in the audience, to scream and they have screamed "Shige". It was funny to hear that there were some men at the concert !!
I don't remember what they were talking about, just that I've laugh a lot, they have said silly things, and at the end while Koyama and Pi were backstage I don't remember who, I think it was Tegoshi because he was the last on scene, he said that next would be Koyama's solo...
WHAT !!! Eeeeeeeeeeeeeeeeeh impossible ! So when the first note of Love addiction came I screamed so much that my throat hurt me for 1 week XD

Love addiction - My lovely Koyama dancing on Love addiction, pure joy.
Gomen ne Juliet - I have screamed soooooo much when I've understood that it was that song, I have watched Yamapi's solo so many times than seeing it in real was like a privilege, and he has opened his shirt like in the Pacific DVD, thank you Yamashita for fanservice !
Ginza Rhapsody - The dance with Koyama and the juniors is really great.
Aiaigasa
Mafuyu no nagareboshi
Snow Express - The moves the mooooves !!!! I could do it forever !
Forever - They were scattered on the main scene and danced smoothly, undulating their hips. Very cool.
Cherish - Love love love love love
Teppen
Code - Thanks, I've heard this song live T_T what a great song in fact ! Ryo didn't scream, his voice was nice to hear, the rythm makes me sway.
Change the world
Beach angel
Fly again

Encore :
Kibou yell - During the song Massu had a camera with him and he shot the audience and the members, I hope we will see it on DVD ! I have waved to the camera lol
Weeeek

Encore :
Hadashi no Cinderella boy - We have yelled more than 5 minutes for this last encore :3

With Change the world, in the center stage Koyama was lying down on the floor and was looking for Tegoshi but he didn't come straight away so Koyama was gazing at him as if he was asking him "Will you come or not ?" so Tegoshi laid down on him as if he was about to kiss him, Yamapi sat down on Tegoshi, poor Koyama.
Each member has passed in front of me, but that time no one has looked in my direction. The family section was on my left side and Ryo was waving to some children and smiling at them. I've thought that he really enjoys children, it's not the first time he does this. Yamapi has come with one of the cart like Koyama and Ryo did. Massu and Shige on foot ?!
Below my bloc were disabled girls with wheelchair, Yamapi when he was on the cart touched their hands with big smiles, one of the girl even stood up, I was shocked ! It was like "OH MY GOD, YAMAPI IS JESUS !" He can do miracles !
Ryo came later with the cart at the same place, the girl reached out her hand (she wanted to touch his hand like for Pi), he saw her and do nothing. He was like "Too easy, I won't do this"... (but he's smiled at least)


After the first encore we have screamed again and again and they have come back yeah ! Maybe because it was the last concert in Hiroshima ? They were dressed with their casual clothes but I only remember Ryo because he was wearing a kind of tracksuit, a black one with white motif, I don't remember what has happened during Hadashi no Cinderella boy, they have waved at us of course, just that for the hand moves I've taken my penlight in my left hand so I could do like other people, wave to them properly...

At the end, the very end, while the song was about to end and that Ryo was the one on our side I could see him pass the family section thinking how so serious he was.
On one side he has smiled a lot at Tegoshi during the concert and joked with the other members, and on the other side he seemed so shy with the public, for example when passing in front of my bloc the first time he has waved as if he was saying... "I am waving to you just because it's my job cause I don't care", the day before I was telling myself "I hate him during concerts, I'm her fan but in concert he isn't kind/smiling like the others, it was the same in May at the Kanjani8 concert...". This time I thought that maybe it was because he's shy or because he's too cool so he won't do it, etc etc.

So for the last time he went past to my bloc and as he was at maybe 4 meters from me I looked at his eyes as he was looking at my bloc, and suddenly I have seen a weird expression in his eyes, he looked towards me with surprise/question, I remembered foreigners fans saying that some singer used to see them in surprise because they are foreigners, so maybe he was looking at me ?
I don't know why I have done that but I have put my hand to my mouth and I've blown to him a kiss my mouth wide opened then with a big smile on my face, it must have been greatly weird... And... He has seen me because he has done the same to me. 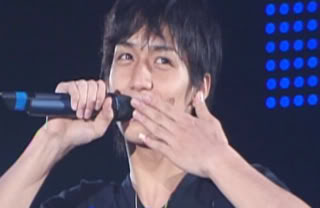 He has put his hand in front of his mouth, blow a kiss to me with a big smile, a little bit like on the N.E.W.S. DVD when the fangirl asks for a kiss, it was so funny, this time I'm sure he has seen me it cant' be any other way, we couldn't have the same idea at the same time, I couldn't help but laughing as he was going to the main stage.

To see one's favorite idol eyes in eyes is such a thing, I can't die I'm already in paradise XD Take me away on your white horse kyaaaaaa *w* I am erasing all the bad feelings I have had about Ryo, I love you Ryo !
..... It was that that I was thinking about as I was seating waiting to leave. What a silly thing I've done and he has smiled in reply, in fact he is funny !

(The third concert will show me that I was right about my second feeling, and that my first belief in Ryo was indeed totally wrong...)